Protect yourself online, with the help of our very own password generator, Word Recipes.

It’s common knowledge that a large number of people use the same password for almost everything, thinking that because it’s a “good” one, they’re safe. Right? Wrong.

Even the most secure of passwords can be hacked with the art of brute-force and once that hacker has entry to one site with this tactic, they have entry to them all.

Brute-force is a method of decoding encrypted data, such as passwords, with the seemingly simple method of trial and error.

A "brute force cracking application" will try, one by one, billions of combinations of letters, numbers and special characters until the correct one is found - or until they give up and move on to the next potential victim. Although time consuming, it has a high success rate compared to other methods.

Some attacks begin with a dictionary attack, which tries common phrases or passwords, so thinking about it logically, the application is far more likely to successfully crack 12345678 or "password" rather than 47v$4$-2o%2I - and this is where we can help you in coming up with strong, safe passwords.

Secondly, we have developed our very own See Green Password Generator: Word Recipes!

Word Recipes is a password generator created by us. Offering a number of password options from friendly word combinations to 32 character alpha-numeric passwords with over 100 octodecillion combinations (that’s a number with 57 zeros at the end - we didn’t make it up). And with a password like that it would likely be the end of time before a brute-force attack guessed it.

It uses four different types of passwords: some easier to remember than others. With different passwords for everything and some that you have no chance of remembering, it’s advisable to use an app such as 1password or Password Safe, to keep them all securely under one roof.

The four types we use:

A strong password containing letters (in uppercase and lowercase), numbers and special characters.

A medium strength password. Easier to remember than a random string of characters.

A password containing just letters (in uppercase and lowercase) and numbers. Useful for systems that don't support special characters.

Please note: This is randomly generated, and not our opinion of the various people!

However if you’re still worried and would like some advice on password security, or are intrigued by our password generator, feel free to call us on 01904 500500 or drop us a line at hello@seegreen.uk. 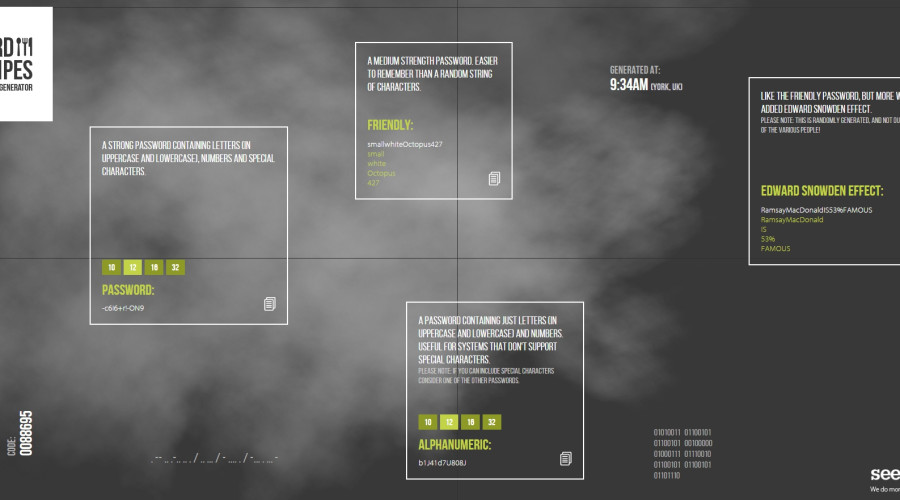